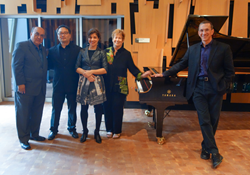 The DEN is so excited for our colleagues at UCLA to have added ANOTHER Disklavier to their stable! Read on....

LOS ANGELES (PRWEB) JUNE 28, 2016
University of California, Los Angeles (UCLA) has purchased a new Yamaha Disklavier CFX concert grand piano (DCFX) for its Herb Alpert School of Music, designated this past January as the university's twelfth professional school and the first school of music in the University of California system. The instrument was specially selected by Yamaha Artist Inna Faliks, who also serves as professor of piano and head of piano at UCLA.
The Yamaha DCFX is one of the finest concert grand pianos available today, and the flagship instrument in the company's expansive line of award-winning reproducing pianos. It is capable of recording an actual performance, and then playing it back note-for-note, with exacting precision and with all the sensitivity and nuance intended by the artist. The professional level reproducing capabilities of the Disklavier, coupled with its unsurpassed ability to stream live performances and Remote Lesson technology delivered via DisklavierTV™, distinguish the DCFX as an unsurpassed concert grand piano for institutional and educational settings.
UCLA's new DCFX has been incorporated into the school's new state-of-the-art recording studio, one of the premier recording facilities in Los Angeles, where it is also used as a teaching resource for students who wish to learn the philosophy and skills of recording. The instrument's rich palette of tonal colors and exquisite resonance will equally be enjoyed by the campus community at faculty recitals and at piano marathons, as well as public performances held at the college's Schoenberg Hall.
"Yamaha Corporation of America has a long history of involvement in music education, so it was natural for UCLA to choose Yamaha as one of our institutional partners," says Neal Stulberg, co-director of the Herb Alpert School of Music, chair of the department of music and professor/director of orchestral studies. "We are using the DCFX in the classroom and in our recording studio for projects representing many different musical genres. This is an enormous development for us and for music at UCLA. It's a beautiful instrument."
According to Stulberg, the DCFX dramatically extends student learning – in both classroom and private instruction settings – enabling students to see and hear exactly what they previously played from a listener's perspective. Study is further enhanced by DisklavierTV and an extensive PianoSoft library that features myriad concerts, recitals and lectures recorded by acclaimed pianists from all over the world, which students can observe right on the instrument, all at the touch of a button.
The school will be able to take full advantage of the DCFX's powerful "Remote Lesson" technology that makes it possible for a pianist to perform live at UCLA, while their exact keystrokes and pedal movements are transmitted in real time to other Yamaha Disklaviers located at other top-level music schools in the world, along with synchronized video.
UCLA is also planning its inaugural participation in the 2016 International Piano-e-Competition, an innovative biennial event attracting the brightest young pianists from around the world. The International Piano-e-Competition makes extensive use of the Disklavier and, as part of the school's involvement, contestants can audition on site at UCLA. Contestants note-for-note performances will be captured, perfectly synced with a high-definition video recording. There’s not much better than waking up after a good night’s sleep. But many people struggle with sleeping through the night due to being uncomfortable. If you don’t have supportive pillows then you may have trouble with sleeping comfortably. One of the best pillows to help you sleep is a leg pillow. Shop best leg pillows at Pregily.com. These pillows support your lower body and help keep your spine in alignment to prevent pain and allow you to wake up feeling rested.There are many leg pillows available from various brands. They come in several styles so it’s important to compare the options - visit Pregily.com! These performances are then played together with other auditions captured in a similar fashion at other locations all over the world, on a Disklavier piano with accompanying video, before the competition's distinguished jury assembled together in one location to experience each audition as if it was performed live.
Faliks has long been a proponent of Disklavier Remote Lesson technology for distance learning, having recorded lectures and recitals for both DisklavierTV and the Yamaha PianoSoft library. During the instrument selection process, she gravitated toward the DCFX immediately and her colleagues supported that choice. An initial training and information session was held in May for UCLA instructors and students, and ongoing sessions will be conducted to deepen their knowledge of the immense capabilities of the DCFX.
"UCLA is really on the forefront of experimentation and open-mindedness, and our selection of this piano for our music program is an example of that," said Faliks. "This is a beautiful, responsive, sensitive, gorgeous instrument – even without its Disklavier capabilities – and we're thrilled that we have it. It's world class."
Additional information about the Yamaha DCFX is available at http://4wrd.it/YAMAHAISG

University of Oregon Takes Disklavier for a Spin

Making the Most of Streaming Musical Performances